HomeIn The NewsElderly residents take up Mashaba’s call to clean 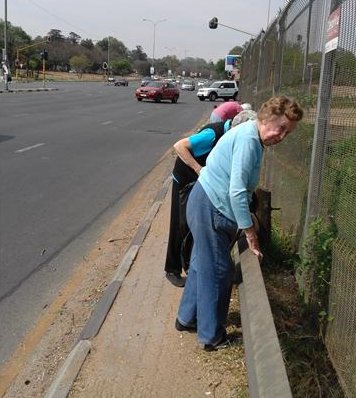 In response to the request by Executive Mayor Herman Mashaba, six elderly residents of the Rosehaven Retirement Village in Hurlingham dedicated themselves to clean up the area nearby their home on 30 September.  Mashaba called on residents of Johannesburg to participate in the citywide A Re Sebetseng (let’s work) volunteer campaign starting on 30 September. The campaign urges community members to take ownership of their city and keep communities clean by working together. The campaign will take place on the last Saturday of each month. Residents of the Rosehaven Retirement Village clean up litter along William Nicol Drive as part of executive mayor Herman Mashaba’s call to clean up the city. Herman Tienjies waves to motorists passing by as he cleans up.

Organiser of the cleanup, Greta Collier said the residents, most of whom were well into their 80s, cleaned up rubbish from the corner of St Andrews Road, along William Nicol Drive to the Total Garage in Hurlingham.

One of the most outstanding participants was Joyce Hodgson who is 90 years old.

“We had a lot of fun working on this project as the traffic whizzed by behind us. I think the passing traffic must have thought it was hysterical because they had a lot of backside views from us all,” said Collier.  Collier added that there was a huge amount of rubbish to be collected along the Braamfontein Spruit in front of the retirement village, but, because of the age of the volunteers, they were unable to attend to this part of the spruit as it is located on a steep incline.