HomeIn The NewsMayor sweeps the city 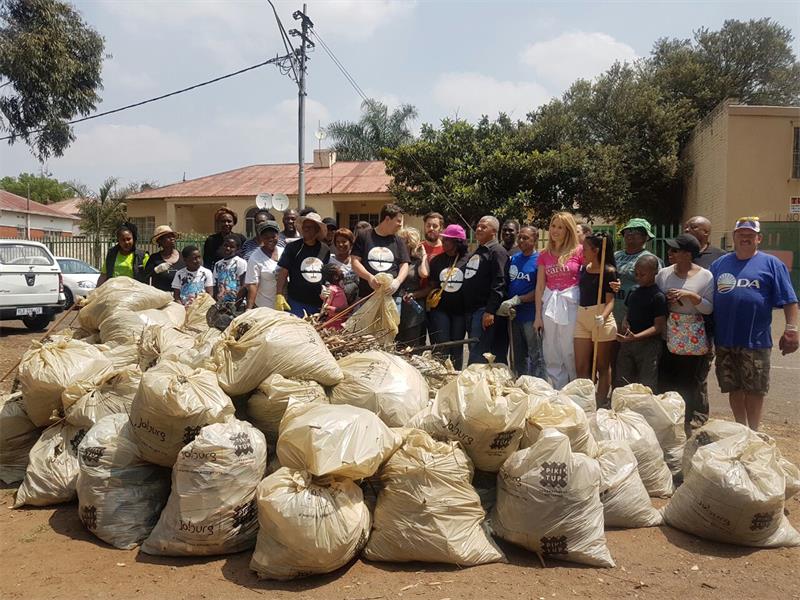 A BIG ‘thank you’ has come from the city’s number one, Mayor Herman Mashaba, following a successful city-wide weekend clean-up campaign.

On September 30, the Johannesburg mayor swapped his suits for overalls and gloves to spearhead the A Re Sebetseng voluntary clean-up campaign.

The campaign, which is about communities taking pride in cleaning their areas, sought to promote a culture of cleanliness in areas associated with dirt and grime.

The mayor involved government and communities in a campaign which saw many dedicate the last Saturday of the month to cleaning areas in which they live. FOR EARTH: DA Ward 54 Clr Sergio dos Santos also spearheaded clean-ups in his ward on the corner of Swartgoud and Burger streets in Suideroord.

A Re Sebetseng is about re-awakening the spirit of the community and taking responsibility for the cleanliness of their areas.

The mayor said a cleaner Johannesburg will be more attractive both to visitors and investors.

The city’s mayor personally targeted a few places on Saturday, namely Alexandra to Linden, the inner city and Oberholzer Park in Rosettenville.

Mashaba said he was heartened to see residents coming out in their numbers.

“Every effort counts. The City of Johannesburg belongs to all those who live in it and I cannot overstate the importance of each and every one of us playing our part in turning Johannesburg into a true city of golden opportunities.”

He said R 2.4-billion was allocated to Pikitup in the 2017/18 financial year and a further R50-m was included in the budget to continue Pikitup’s third cleaning shift within the inner city.

More clean-ups were also conducted in several areas in the south of Johannesburg.

The campaign was successfully launched in Ward 56 at the Oberholzer Park in Geranium Street, Rosettenville. The clean-up took place on September 29 and September 30.

Ward 56 Clr Michael Crichton, ward committee members and residents came to assist over the course of the two days. Crichton said: “I believe the launch of the A Re Sebetseng clean-up campaign in Ward 56 has been highly successful and I hope that even more residents volunteer to assist with the next clean-up campaign.”

On Sunday, DA Ward 54 Clr Sergio dos Santos also spearheaded clean-ups in his ward on the corner of Swartgoud and Burger streets in Suideroord.

He said everyone was in great spirits and took time out of their busy schedules to make the difference that was needed in communities.

“It starts with us,” said the exemplary dos Santos.

The A Re Sebeseng clean-up campaign is scheduled to take place every last Saturday of the month, with the next one scheduled for October 28. You are advised to contact your local ward councillor for more information on how to get involved.