HomeIn The NewsCity of Joburg thanks community for clean-up...

City of Joburg thanks community for clean-up efforts 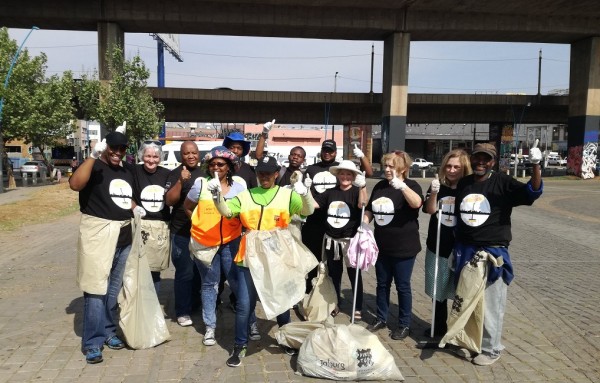 Source: eNCA
The City of Johannesburg held its first successful city-wide A Re Sebetseng voluntary clean-up.
Photo: Supplied/City of Joburg

The City of Johannesburg held its first successful city-wide A Re Sebetseng voluntary clean-up. Photo: Supplied/City of Joburg

JOHANNESBURG – The City of Johannesburg held its first successful voluntary clean-up, the citywide A Re Sebetseng project took place on Saturday.

READ: 8 ways to cut back on carbon for #WorldEnvironmentalHealthDay

Executive mayor, Herman Mashaba said in a statement, “Throughout the day, I had the opportunity to traverse the City from Alexandra to Linden, the inner city and Oberholzer Park in Rosettenville.

“I was heartened to see so many of our residents coming out in their numbers to help transform Johannesburg into a clean city we can all be proud of.”

“I would like to express my deepest appreciation to all residents who took part in today’s activities whether at your local park, throughout your ward or just in your street. Every effort counts.”

The City of Joburg has stated the intention to host clean-up events monthly, on the last Saturday of every month.

Some residents reportedly experienced setbacks in participating in the cleanup because some ward councillors did not take part in the organisation of the event.

Mashaba expressed his hope that all the ward councillors would participate in future and committed that the City would be supporting the efforts.

He explained, “In an effort to clean our City, we have allocated R2, 4 billion to Pikitup for the 2017/18 financial year. A further R50 million is also included within the budget to continue Pikitup’s third cleaning shift within the inner city. However, we cannot solely rely on the services of Pikitup to keep our City clean.”

He ended his statement saying, “We all have a responsibility to keep our environment clean and our collective ability to bring change to the City cannot be over-estimated. By all of us working together to clean our City, we can build a Johannesburg future generations can be proud of.”